June 29, 2021
Letter from Atulananda Maharaja to mother Radha Damodar and devotees, 03.05.2021 First of all I want to apologize to mother Radha Damodara for taking so long to write this letter. It is because, as they say in Chile, "I don't want any more war". But my heart feels that it is a great sin not to say anything. For a mother to lament so clearly, so bravely and sincerely, and for one to simply say nothing, no, that cannot be, it would be a lack of manliness. To make a mother suffer is the most inauspicious thing in this world. The truth is that I was very disturbed to hear those things again. I think of them, how much they must have suffered as a couple. All these years have been suffering and I, for my part, ask for their forgiveness, because I do not want to be a participant in this sin. To remain silent is to partake. No, please. I cannot sing quietly, I cannot sing my rounds. After the mother's letter, an absurd and defiant letter from a supposedly anonymous author was
Post a Comment
Read more

18. Farewell Letter from Haladhara das to the Berlin Hindu Community

September 10, 2019
This is Haladhara d.'s farewell letter to the Berlin Hindu community ( see also 9. Letter from Haladhara das to Paramadvaiti Maharaja ) , which he has led for over 25 years during which he has been often attacked for his critical views on BAP. For years he has been constructively critical of BAP's increasingly questionable leadership style, which has been incapable of accepting this well-meaning criticism. In this letter to the members and friends of the Hindu community in Berlin, he summed it up in April 2019. At that time, only Radha Kunda's accusation of abuse was publicly known. This letter is also about illuminating the causes of a spiritual community increasingly characterized by abuse and fraud, which has clearly become a (dangerous) sect. 1. "The Hindu community as a community and many members as individuals are currently going through a crisis that we have never experienced before. The causes are deep and the symptoms have been growing for a long time.....
1 comment
Read more 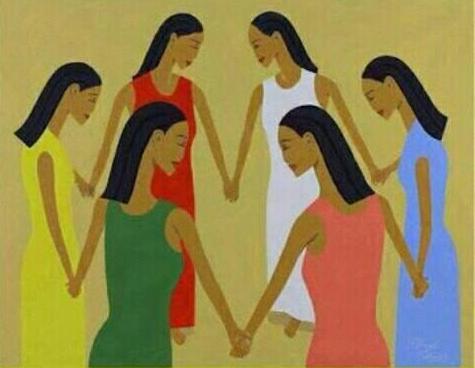 The following testimony by Vrindavan Vilasini describes similar experiences to the ones Sita had. September 2019 Paramadvaiti Swami (PS) is a pilgrim monk living in the order of sannyas or celibacy for over 30 years. Since then, he travels around the world lecturing at universities and performing festivals of universal love as the leader of the Vrinda mission, which he founded. When I met him in 1997, he seemed to me to be the most lucid, noble person with the most interesting ideas about spiritual life in the modern world. At that time I was studying at the university and I asked my parents for permission to freeze a year of my university career so that I could live in one of the temples he directed and learn about spiritual life. He gave me initiation that year and became my Guru or spiritual master. I spent one of the most beautiful years of my life, I am happy and grateful to have had that experience. One night, after one of his lectures during his visit to Santiago de
Post a Comment
Read more

16. Transcript of an Audio message from Sita d.d. to Pariksit das In response to Pariksit's audio, Sita d.d. from Ecuador came forward with her own experience. Sita d.d. was sexually assaulted by Paramadvaiti Maharaja in India. While addressing Paramadvaiti Maharaja directly, Sita's voice turns tearful and broken:  "Please think of the hearts of the people you have touched with your tireless preaching for over 40 years, and who are now confused, hurt, and helpless. Apologize from the heart, amend, since at this time there is no coherence between what you have preached and what is happening." September 2019 Hare Krishna P. Pariksit. I wanted to send you my most respectful obeisances for having the courage to make audios about the situation that is being experienced in the Vrinda Mission in relation to Guru Maharaj. I send you this audio with the only desire to validate your words, without the intention of harming anyone, but with the intention of saying that what you have manifested in the audios regarding the inappr
Post a Comment
Read more

Paramadvaiti Maharaja's testament, published in 2000, perfectly describes the situation in which he currently finds himself.

August 28, 2019
TESTAMENT  OF A ASPIRANT, TO ONCE BE ALLOWED TO SERVE HIS SPIRITUAL MASTER WITH SPONTANEOUS LOVE by Swami B.A. Paramadvaiti "When we look at the history of Guru-parampara and religion in general, we sadly find that the same symptoms can occur again and again. It is mostly a matter of a few (but unfortunately they are often in leadership positions) who through their behaviour transform the mission from its original character of voluntary enthusiasm into a dictatorial, blind hierarchical system. While the teachings of the old masters are still presented, they are alienated and applied in such a way that people can no longer recognise the pure, clear essence, but become entangled in a network of outward appearances and understandings of form. The most frequent symptoms, which always occur and of which I would like to expressly warn, are arranged in the following points: 1) Materialistic lifestyles, although denied, are justified by the excuse of great holiness. 2) Holy mess
2 comments
Read more 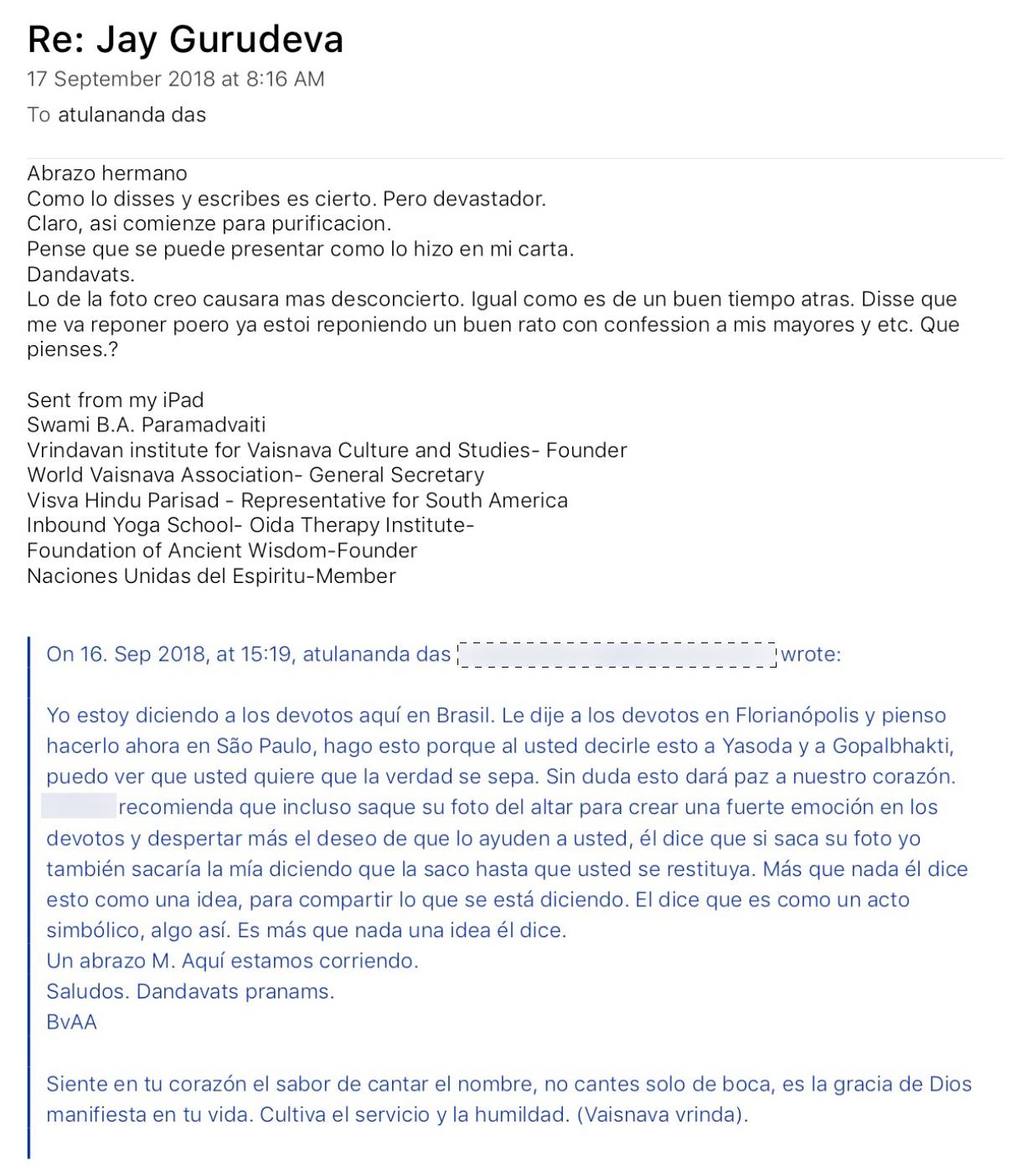 When a teacher is found to have inappropriate relations with his student, there is a (visible) consequence: he is suspended. Atulananda Maharaja suggests a mild consequence, to take off the picture of Paramadvaiti Maharaja (PM) from the altar “like a symbolic act”. He even suggests that he would take down his own picture as well “until you are restored”. Actually many disciples waited for a “visible” consequence. But nothing happened. Every day the lectures of PM were broadcasted via Gurudeva LIVE to disciples worldwide as though nothing had happened. Watching the broadcast on Gurudeva LIVE, many disciples felt disturbed. (Gurudeva LIVE was deactivated or deleted 3 days ago, for unknown reasons) So in September 2018 Atulananda Maharaja announces to PM that he intends to tell devotees in Brazil, about what happened. PM response: "The way you dissipate it and write it is true. But devastating. I thought you could present it yourself as you did in my letter. Dandavats." It is
Post a Comment
Read more 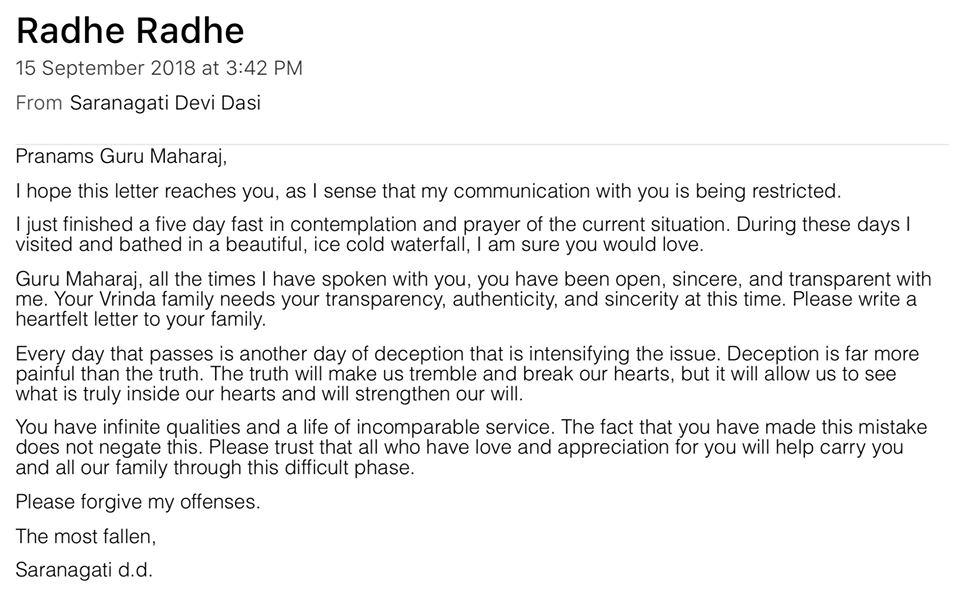 After Saranagati dasi confronted Paramadvaiti Maharaja on phone regarding the allegations from Radha Kunda dasi (while Radha kunda was secretly recording the conversation), Saranagati had an E-mail exchange with him. She urged him: "Your Vrinda family needs your transparency, authenticity, and sincerity at this time. Please write a heartfelt letter to your family." But at some point Paramadvaiti Maharaja stopped to answer and she felt that "that my communication with you is being restricted" (by either Kalki Avatara or Pancha tattva). Until today a "heartfelt letter" was never officialy released. September 2018 Pranams Guru Maharaj, I hope this letter reaches you, as I sense that my communication with you is being restricted. I just finished a five day fast in contemplation and prayer of the current situation. During these days I visited and bathed in a beautiful, ice cold waterfall, I am sure you would love. Guru Maharaj, all the times I have spoke
Post a Comment
Read more 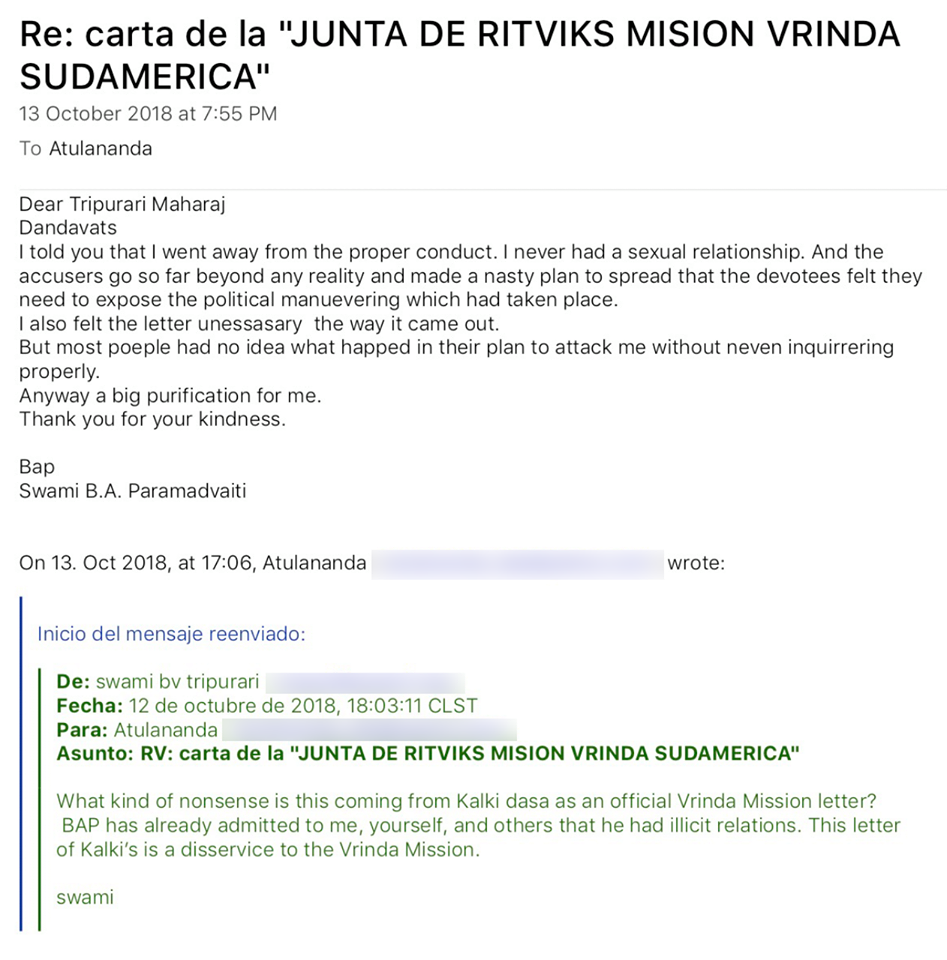 Tripurari Maharaja writes regarding Kalki Avataras "nonsense" conspiracy letter which is "a disservice to the Vrinda Mission", Paramadvaiti Maharaja answers via Atulananda Maharaja  October 2018 Tripurari Maharaja What kind of nonsense is this coming from Kalki dasa as an official Vrinda Mission letter? BAP has already admitted to me, yourself, and others that he had illicit relations. This letter of Kalkiʼs is a disservice to the Vrinda Mission. swami Paramadvaiti Maharaja Dear Tripurari Maharaj Dandavats I told you that I went away from the proper conduct. I never had a sexual relationship. And the accusers go so far beyond any reality and made a nasty plan to spread that the devotees felt they need to expose the political manuevering which had taken place. I also felt the letter unessasary the way it came out. But most poeple had no idea what happed in their plan to attack me without neven inquirrering properly. Anyway a big purification for me. Than
Post a Comment
Read more

October 2018 Jay Gurudeva, I'm sorry but I didn't like Kalki's letter. It is to reignite the fire, and even quote my children, what does that accomplish? ... Talking about conspiracy is too much. I only accept that there were mistakes, but I will not think badly of Saranagati or Narayani. This becomes like a witch hunt. Uf, a can of such an unnecessary letter. He sent it without consulting anyone and now I do not know how but everyone has it. I apologize for causing this disturbance. Dandavats pranams. BvAA
Post a Comment
Read more

11. E-mail exchange between a disciple from Bulgaria and Paramadvaiti Maharaja 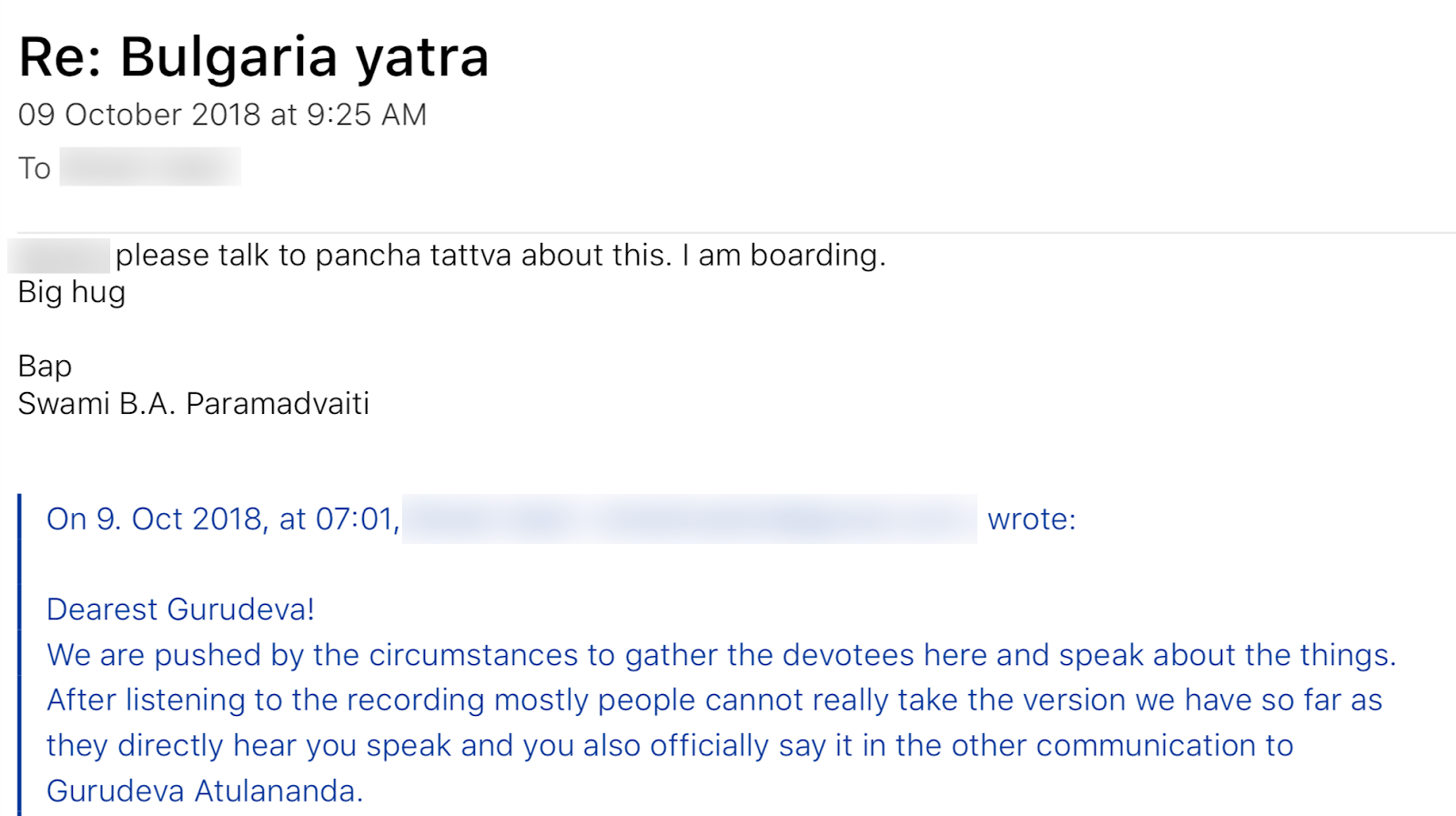 In our last post we commented, that Paramadvaiti Maharaja refers devotees to Kalki Avatara or Pancha tattva (the main architects of the Radha-Kunda Conspiracy theory) to clear up their doubts. In the following E-mail exchange the same thing happens October 2018 Disciple Dearest Gurudeva! We are pushed by the circumstances to gather the devotees here and speak about the things. After listening to the recording mostly people cannot really take the version we have so far as they directly hear you speak and you also officially say it in the other communication to Gurudeva Atulananda. Paramadvaiti Maharaja ... please talk to pancha tattva about this. I am boarding. Big hug Bap Swami B.A. Paramadvaiti
Post a Comment
Read more 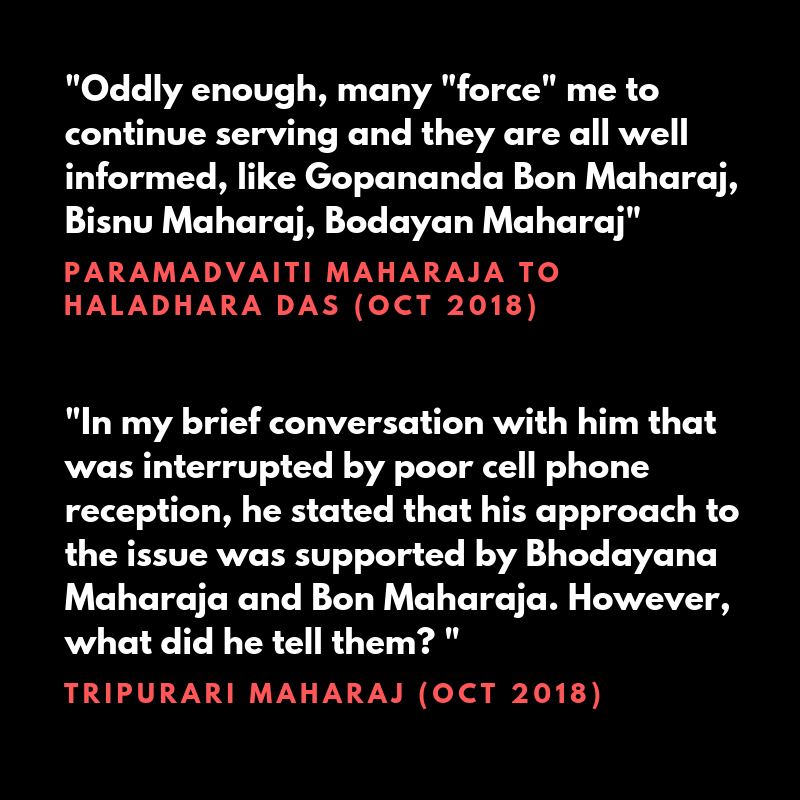